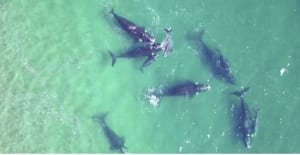 But that may soon change. Scientists have developed a new way to calculate a whale’s weight, using images captured by drones, according to a report published today in the journal Methods in Ecology and Evolution. The images are input into a computer model that measures the length, width, and height (from its dorsal fin to ventral fins) of a whale and accurately calculate its mass. Before this new technology was introduced, the only way to take these measurements was to weigh dead or stranded whales.

“Weight measurements of live whales at sea inform how chronic stressors affect their survival and fecundity, as well as enabling accurate sedative dosing of animals entangled in fishing gear that are aversive to disentanglement attempts,” coauthor Michael Moore, a senior scientist at the Woods Hole Oceanographic Institute, said in a statement.

Over the course of the study, the researchers snapped pictures of 86 southern right whales—48 calves, seven juveniles, and 31 adult females—off the coast of Península Valdés, Argentina. They then fed the images into a computer model that used existing measurements to calculate the mammals’ mass and model the body shape. Lastly, the team tested their method on a group of eight deceased North Pacific right whales, for which mass measurements were known, to ensure its accuracy.

The researchers admit there are some limitations to the new method. In order to get an accurate weight calculation, the scientists must assume that the whales have a constant body density, even though it changes throughout the seasons.

The model can also calculate measurements for other types of whales, such as blue or baleen whales, which have been especially difficult to track and play an important role in the ocean ecosystem. The researchers are also working with the University of Massachusetts’ Digital Life Project to develop 3D models of the individual whales, which can be used to track their growth and be included in educational software for classrooms and museums.