A truck-mounted, multiple-barrel rocket launcher can send 48 missiles flying toward a target all in a minute. Such a launcher is highly mobile, very fast, relatively cheap, and easy to operate. No wonder a weapon like that is popular in conflict regions.

But the launcher’s questionable quality can cause the missiles to occasionally misfire, which is why they often litter the ground in targeted areas. The problem, then, is finding them. Now scientists think they have the tech to easily track and retrieve them.

At last month’s American Geophysical Union Annual Meeting in San Francisco, researchers reported a new technique to identify these unexploded ordinances, or UXO, from the air. Using hybrid drones and shrunken technology, the scientists can survey up to 100 acres an hour and have a map of possible armaments within minutes.

“There’s this kind of evolutionary moment when the two technologies are meeting for the first time—the miniaturization of sensors and the dependability of drones,” says lead study author Alex Nikulin, a geophysicist and Binghamton University professor. “The union of those two things changes the game.”

“Different countries make better or lower quality ordinances,” says the study’s coauthor, Timothy de Smet, also a geophysicist and professor at Binghamton. He says some fighters get knockoff missiles or raid stockpiles that can be more than 30 years old—and explosion rates can plummet as the missiles wear down with time.

The result? Post-conflict landscapes can be chock full of hazardous, 3-meter-long unexploded missiles.

Although people can find errant missiles, the task is less than ideal. On-foot surveys can take a long time and the risks are high. Drone surveys can remove the human element and reduce risk.

But drone flights are notoriously short, making surveys difficult. “The big problem we ran into was when we started this was battery life,” says Nikulin. He notes that prior drones—from inexpensive to premium—had short, 15- to 20-minute flight times. “We can’t use those drones for wide service areas.”

Enter the Ukrainian company UMT, which developed a hybrid drone called Cicada that can stay in the air for three hours. Nikulin says they read about the new drone, wrote the company, and ended up collaborating on the new study with the UMT engineers to find UXO.

Truck-launched missiles spray across a 600-meter-wide area, says Nikulin, compared to a single location. And the targets move. “For example, if you have a checkpoint that is in one place this week, next week it’s someplace else,” he says.

Shelling can be almost continuous, but not every missile explodes. Out of this barrage, Nikulin says anywhere from 20 to 40 percent (and as high as 80 percent, depending on the quality of the missile) of the explosives can fail to detonate.

“Geophysical methods can be very effective for UXO detection,” says Andrei Swidinsky, a geophysicist at Colorado School of Mines who wasn’t involved in the study. “Several methods operate in principles similar to airport metal detectors, and as such are sensitive to UXO that may be present in post-conflict zones.”

In an airfield in Ukraine, the scientists tested how a drone-carried microfabricated magnetometer might detect 3-meter-long missiles. UMT flew the Cicada over the field with the magnetometer dangling below.

But knowing their target shape and signature allowed the researchers to leverage the sensor capabilities to get the perfect picture of what might be buried underground. “You can use the altitude to filter out clutter,” says de Smet.

Objects lose their magnetic signal quickly with distance, he says, so there’s a sweet spot for finding a 3-meter missile. “Everything that’s smaller than the object you’re looking for disappears,” says de Smet. “You’re using the altitude as a low-pass filter.”

The long flight time, paired with keyed-in elevation, meant the time got a map of the ordinances in short order—an entire field of data within 45 minutes. Nikulin says he and his team want their technique to be usable on the ground. “Our entire idea is you basically open up a laptop and in five minutes you have an actionable map.”

With the magnetometer, each UXO is geolocated using GPS, allowing researchers to plot locations on a map. During the survey, the team found an ordinance that was unknown to the Ukraine military. The missile was buried vertically, with only the very tail end peaking above the soil. With a handheld GPS, the team walked out to the location with the military personnel and found the almost-hidden ordinance. “At that point, their faces just went white,” says Nikulin. 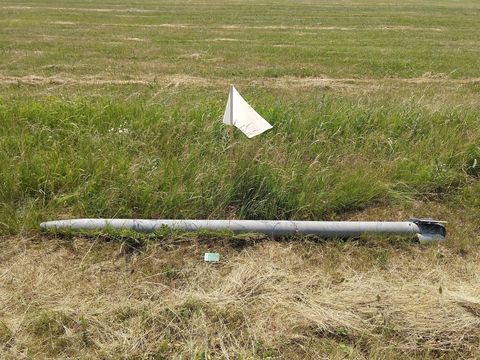 Since the field test, the team has been certified for IMAS, or the International Mine Action Standards Certification. The scientists’ method is now certified for a wide area technical survey, which is essentially confirming the absence of presence of a threat. “Then you as the stakeholder, the government regulator, the emergency ministry, the humanitarian organization, can use that data to plan your work,” says Nikulin.

“Using an autonomous platform allows large areas to be quickly surveyed at low cost, and minimal risk to operators,” says Swidinsky. He notes that drone-based geophysics has moved past experimental stages and is now a routine approach.

As for finding UXO, Nikulin says this as far as the scientists can go. “Now,” de Smet echoes, “we hand it over to non-governmental organizations.”